We recently went to the URA office at the Nakawa Industrial park and received very hostile customer service from one of their members of staff. The female URA employee was rude and aggressive with us her customers who I must admit had come to register for a TIN number in a bid for tax compliance. So I wondered, what happens to those customers who try to evade taxes if this is how compliant customers are being treated, I can only imagine.

I choose not to digress because the URA woman is not the main story here. So as we drove into the business park, parking was hard to come by but we eventually found a corner at which to park which was labeled NO PARKING. We did not intend to park there but we had been directed to head in that direction by a G4S security guard from the entrance. Little did we know that an incident would ensue as a result.

G4S Security Guard: ‘’Hello madam, why are you parking here?

Female Driver: ‘’Because I was told to park here but I will not be taking too long anyway. I am only going to the URA office.’’

G4S Security Guard: ‘’Okay madam, any way you will find me here.’’

Female Driver: ‘’Okay, sir!’’ she said as she briskly walked towards the building entry checkpoint to speed things up.

Now between the time she left and her return 12 - 15 minutes later, there was no sign of the security guard at all. But the moment the female driver stepped out of the building and walked towards the car, the security guard appeared from behind a tree smiling from ear t0 ear and said;

Female Driver: ‘’Hihihi thank you, ‘’she said in response.

G4S Security Guard: ‘’Now between you and the madam, who is the boss?’’ he asked the co-driver who was American and Caucasian.

As passengers in the car, my neighbor and I looked at each other a little confused as the co-driver responded;

American Male: ‘’The lady is always the boss, you should know that by now.’’

We all burst into laughter but I must say I was still very confused with his line of questioning as he continued to linger around the driver’s window.

Female Driver:’ ‘’Sebo, get yourself some water,’’ she said as she gave him 1,000 shilling note as we pulled out of the parking area to exit the industrial park.

G4S Security Guard: ‘’Yes, thank you, madam. For sure you are the boss lady.’’

To me, the conversation and actions of the G4S security guard were so wrong on so many levels. First of all, why would he assume that a lady cannot be in charge, secondly, why did he linger at our window for a tip when he clearly receives salary on a monthly basis?

Now to the G4S Security Company, I am not saying you should hunt me down to find out this fellows identity and fire him. No, that will not solve your problem but rather dig deeper into the issue and solve the problem and not treat the symptoms. Yes I know some of it stems from our cultural dilemma, well there can also be a cultural change and it needs to start somewhere or else this security guard and many like him will continue to steadily destroy your G4S security) brand.

Or maybe, I am too particular and pick up on things that should be left alone. This is where I say, the views expressed in this blog are my individual views and do not reflect the views and values of the company(s) I work for. 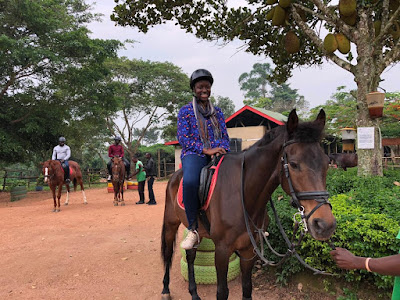